The Yard 56 project is in one of the city’s 42 designated opportunity zones, part of 149 such zones in the state where investments are eligible for preferential tax treatment using vehicles known as opportunity funds. Taxpayers who put capital gain profits in an opportunity fund can defer paying taxes on those profits until as late as 2026. They can also avoid paying those taxes at all if they hold the investment for at least 10 years.

The Yard 56 investment will be Prudential’s first in an opportunity zone. 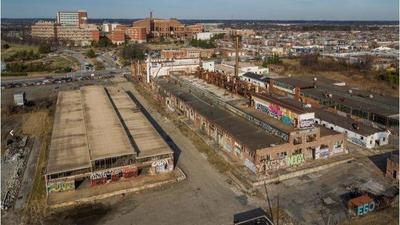 “This project is a once in a generation opportunity to remove a sign of urban decay immediately across the street from one of Baltimore’s most important institutions, while bringing needed services and jobs to a neglected area of Baltimore,” Daryl Shore, transaction lead from Prudential’s Impact Investments group, said in Friday’s announcement.

The project, under development by Baltimore-based MCB Real Estate, is expected to transform the neighborhood by removing blight, creating permanent jobs and bringing in a grocery store, restaurants and health care services. The developer began demolishing the former site of PEMCO, Porcelain and Enamel Manufacturing, last spring and plans to complete the first buildings by the end of the year

Prudential did not disclose the amount of its investment, but Mayor Catherine E. Pugh called it “sizable.”

”We are thrilled that an important, catalytic project such as Yard 56 is able to benefit from Prudential’s Opportunity Zone Fund,” Pugh said in a statement.